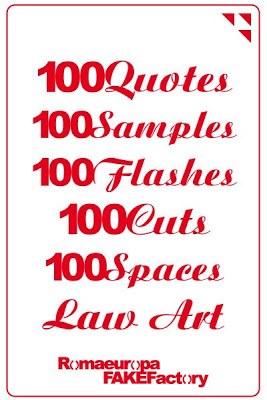 “RomaEuropaFAKEFactory is an international integrated project/competition based on the theme “Freedom to Remix” (sections for: music, video, literature, design, architecture, landscape, law).

We are just starting up the second phase of RomaEuropaFAKEFactory (REFF), which was born as a situationist action in fight of the horrible politics on art, culture and (specifically) intellectual property brought forward by the italian government (and by worldwide governments, as a matter of fact). Full story and press coverage on the website.

REFF has been presented at the Italian Senate on March 20th and it will become the trigger to the creation of a table for digital cultures in the senate’s Cultural Commission. And it has recently become part of the Year for Creativity and Innovation of the European Community. Which is quite fantastic, seen that it started as (and still is) an hack-tivist initiative.

There is a competition on the themes of “Freedom to Remix”, a big event coming in May (28th) in Rome, and in October/November (dates to be defined really soon) in Rome/London/New York (and possibly additional locations). Also a publication featuring an oustanding scientific committee will materialize the cultural and artistic production of the initiative.

Everyone is invited to join in:

we are open to suggestions for additional locations for the event in October/November, to make it a worldwide event on intellectual property

everyone is warmly invited to joining in the competition.

This below is the project’s homepage, on which you can read the story (see “About”), participants (in continuous update, as people join in), scientific committee, and join the competition

the website and competition are just starting up, right now.”