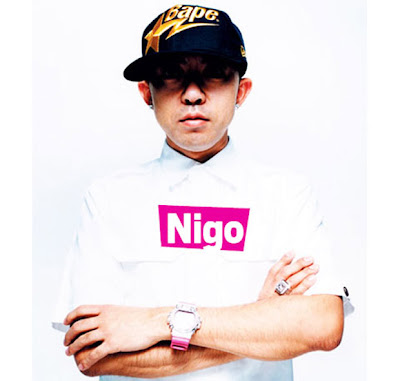 It’s been 15 years since Japanese fashion mastermind Nigo started a streetwear label called BAPE. Back before there was Hypebeast or multi-block lineups for hoodies, Nigo called in a favor and borrowed 4 million yen to set up shop in Harajuku, Tokyo. A decade and a half later, and everyone’s familiar with his gaudy jewelry, flashy hoodies and relationships with trend-setters like Pharrell and Kanye. But how does the brand’s head-honcho really feel?

With the special 15th anniversary commemorative BAPE book coming out this month, we caught up with Nigo for a rare interview. In our November 2008 “My Complex” column, he speaks on his love life, how he feels about Lil Wayne wearing his clothes, blogs, and the constant criticism that A Bathing Ape does Nike take-offs. Check out the five contradictions from Mr. Nagao below…
As Told To: Joe La Puma

#1: “We used to sell to something like 40 different stores in Japan… But around 1998, I decided to just cut back to our one store in Tokyo. It didn’t take long until the sales from one store were as good as when we sold throughout the country. That made me realize that this was something bigger than I had imagined.”

#2: “I don’t think our clothes are so expensive; we make things in a very similar system to high-fashion designers… But we are interested in casual clothes. People get our jeans, tees and sweats confused with mass-produced consumer items. We respect the spirit of what we want to do over financial considerations—that’s consistent with our motto, I think.”
#3: “I sort of fell out of touch with hip-hop… But the thing that got me enthusiastic about it again in the late ’90s was the South, especially Cash Money. So, Lil Wayne wearing the clothes I had made was amazing. I am very pleased if he is known for wearing Bape.”

#4: “I have a girlfriend, and we have been together for about three years. She is a well-known actress in Japan [Riho Makise], and people are aware of the relationship… But she has her own career, and I don’t want to interfere in that. So, there is a conscious decision to avoid being seen together in public too often.”

#5: “I never read blogs. So, I don’t even hear the criticism about us doing Nike take-offs. I’d like to say that other brands doing Bape knockoffs shows that the brand is recognized and desired… But in reality, it’s really annoying to have to deal with it.”