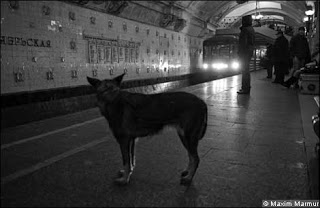 It looks like everybody, but me, was in the know about Moscow’s stray dogs that roam the streets, subways, industrial areas. Even mom. Financial Times has a really nice feature about them and their classification according to biologist Andrei Poyarkov, who spent the last 30 years of his life studying their habbits, living patterns, learning processes, relation to the city and built environments & I’m quite sure more.
Probably you, like me, will have the feeling that he’s describing our little friendly or unfriendly neighbours.

(I would like to take this opportunity to say hello to the philosophy teacher that was arguing that humans are the supreme being because, for example, dogs aren’t able to think – proven by the fact that they hold no memories. I’m going a little off-track here, but if someone could explain where thoughts come from & why some people seem like barking words instead of making sense, I’d be wiling to give it a second thought. Meanwhile, the little bee does not go off track, advocating intellingence & search for a meaning in life, and I thank her for it as it seems to me she’s more conscious about what this earth, and us, need to survive.)