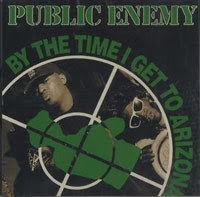 Remix of By the Time I Get to Arizona

In the wake of Republican Governor Jan Brewer’s appalling anti-immigrant law, me and Chuck D were rappin’ and we decided to put together an update of his classic track By The Time I get To Arizona. Anyone who knows about hip hop from the early 90’s remembers John McCain’s unwillingness to endorse creating a local version of Martin Luther King’s birthday. The update here is a 21st century look in the rear view mirror. The cliché that “those who don’t learn from the past are doomed to repeat it” still holds sway in our hyper amnesiac culture. I remixed D.W. Griffith’s infamous film Birth of a Nation with a bit of Public Enemy in mind, and later on, they named an e.p. with the same name as my project. Me and Chuck D have done several projects in the past around progressive, non knucklehead hip hop.

By the way, this is a mashup, and it’s basically not really for sale. I just took a riff from Philly Sound (www.funkadelphiarecords.com), and flipped it. The result, is what you hear here. It’s free, and open. No $!!

in peace,
Paul aka DJ Spooky

Please – don’t bring any presents. We’re trying to funnel all money to the Kickstarter Campaign for my Vanuatu Pacifica Foundation.
A DJ, a Remote island, and a new digital media arts center:
The Vanuatu Pacifica Initiative and the Tanna Center for the Arts.

DJ Spooky is a writer, an artist, and a digital media theoretician. He’s starting a digital media and contemporary arts lab on a remote island in the South Pacific, and is setting up a kickstarter campaign to help defray the startup costs. In tandem with islandsfirst.org, a United Nations affiliated non-profit that focuses on the needs of South Pacific islands, Dj Spooky plans on setting up a situation where cultural exchange between artists from different geographies can take time to do residencies on the island and create projects with local artists and creatives in conjunction with an agenda that focuses on sustainable arts practices. The Funds – Anything you contribute will cover the construction of an initial ‘outpost’ on-site, a feasibility assessment and design of the first phase solar electricity systems for one village and three new structures between now and May 2011, when our first invited artists will arrive. In December, local leadership, DJ Spooky, Engineers Without Borders and the Vanuatu Pacifica Foundation have arranged for R. David Gibbs, a New York-based solar and energy engineer with remote-location experience, to undertake a feasibility study with local renewables engineers, village electricians and tech trainees. The first goal is to replace diesel generators with solar PV and thermal systems that can power villages and initiate the design of the Tanna Center for the Arts’ off-the-grid retreat, cultural preservation and eco-education facility. You’ve probably noticed we’re starting at $10,000 here on Kickstarter but with $20,000 we can complete the solar design phase, engage local craftspeople to build the initial structure(s) and create an ‘outpost’ that allows us to invite collaborators from around the island and the world to begin realizing this vision. Everybody’s help with a little or a lot is welcome, needed and much appreciated! .