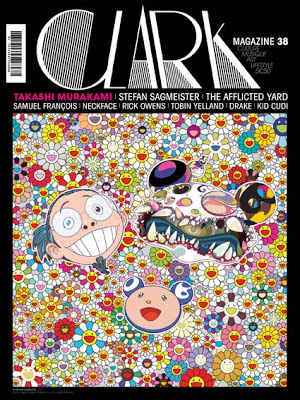 The talented TAKASHI MURAKAMI collaborates with Clark Magazine by appending to it a new self-portrait on the cover picturing himself next to his alter ego Mr DOB. The collaboration will be livened up with a 14 pages portfolio including an interviewThe portfolio will also premiere works from his new parisian exhibition “Takashi Murakami Paints Self-Portraits” at the gallery Emmanuel Perrotin.

Also featured:the portraits of the contemporary artist Samuel François, the Californian creator avant-gardist Rick Owens, the legendary graffiti artist Bando… Some “lifestyle” reviews about the Drago publishing house, on the new Neckface exhibition in Miami, on the observative eye of the photographer and blogger The Afflicted Yard and on the new David Lynch‘s artistic project…

On the side of the 14 pages Takashi Murakami’s interview, we’ll feature works from the Russian studio Geliographic, from the photographer Tobin Yelland and from the artists Rock, Stefan Sagmeister, Chrissie Abbott… This issue will also focus through 6 pages on the Typography with the talents of Justin Thomas Kay, Luke Lucas and Mike Perry… On a musical side, some materials to read and to listen such as Drake, Kid Cudi… Yes, hip-hop is cool again ! Loaded with other things Made in France : Turzi, Joakim & Étienne Jaumet), the neo-hippies Edward Sharpe & The Magnetics Zeros, and Raekwon, Health, Discovery, The Very Best, Amanda Blank, Charlie Greane, Yann Kesz & Lorett Fleur, Souleance, Quantic Soul Orchestra, Dark Night of the Soul. The Epilogue is given to the Belgian artist RVO part of the ERS collective / Party Harders. Clark Magazine
All you should know about modern culture every 2 months since 2001.

The Clark magazine is out now!!! We still have a problem with the shipping for Romania but we hope Guillaume will take care.