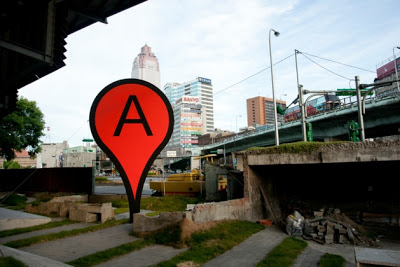 “Aram Bartholl, Map, 2006-2010, public installation, sculpture, 6 x3,50 x 0,35 m
‘Map’ is a public space installation questioning the red map marker of the location based search engine Google Maps. With a small graphic icon Google marks search results in the map interface.
‘Map’ is set up at the exact spot where Google Maps assumes to be the city center of the city. Transferred to physical space the map marker questions the relation of the digital information space to every day life public city space. The perception of the city is increasingly influenced by geolocation services.
Aram Bartholl’s work creates an interplay between internet, culture and reality. The versatile communication channels are taken for granted these days, but how do they influence us? According to the paradigm change of media research Bartholl not just asks what man is doing with the media, but what media does with man. The tension between public and private, online and offline, technology infatuation and everyday life creates the core of his producing. In public interventions and public installations Bartholl examines which and how parts of the digital world can reach back into reality. ‘Actually it’s always about the build object, how it stands in the room, or about the performance itself. Presenting objects in reality is the most important part.”
– via dam-berlin

„‘Dead Drops’ is an anonymous, offline, peer to peer file-sharing network in public space. USB flash drives are embedded into walls, buildings and curbs accessable to anybody in public space. Everyone is invited to drop or find files on a dead drop. Plug your laptop to a wall, house or pole to share your favorite files and data. Each dead drop is installed empty except a readme.txt file explaining the project. ‘Dead Drops’ is open to participation. If you want to install a dead drop in your city/neighborhood follow the ‘how to’ instructions and submit the location and pictures.”